A newborn calf that survived a California wildfire offers hope to us all, just when we really need it.
By
Lisa Foust Prater

California is going through a horrible fire season. Homeowners, farmers, and ranchers are suffering terrible losses, but even in the middle of a disaster like this, glimmers of hope can be found.

The Marsh Fire began on August 16 when thousands of lightning strikes started fires near Milpitas, California, including on the ranch run by Dave and Samantha Cascarini. Dave manages 12,000 acres of steep, rough terrain, and 500 head of cattle. Samantha Cascarini works full-time as a registered veterinary technician in addition to working on the ranch and being mom to Jack, 3, and Jena, 7 months.

With that many cattle over such a large area, the couple decided to split up to move those in danger to safer areas. “We had 45 pairs trapped with flames coming toward them,” Cascarini says. “Cal Fire called and said if we wanted to save the cows there might be time, so that’s what we did.”

She asked neighbor Kathy Torres, a horse trainer, to bring shovels and rope and come help her with some cattle. Fortunately, Torres and her husband, Dan, spent more than 20 years managing the ranch the Cascarinis manage now, so she was very familiar with the land.

Cascarini drove her four-wheeler to the cattle and found a tiny newborn calf lying on a patch of wet grass in the middle of a burned pasture. “I was shocked,” she says. “When I picked her up, she was still covered in afterbirth and the ground was wet from calving. Her eyelashes were burned. I just stared at her in disbelief. I didn’t know what to do, so I just loaded her up on the four wheeler and moved her to safety. It was incredible. I was so worried because her first breath of air was smoke. She was minutes old and a fire burned right over the top of her.”

By the time Torres arrived, Cascarini had moved this calf and several others to a safe spot. While some of the fires in California have high, roaring flames that would surely have killed the calf, Torres says, “It’s more open range and canyons here, so the fire was lower to the ground and not quite as intense.”

If the fire had occurred a few days earlier, many of the cattle would not yet have calved, and if it had happened a few days later, the calves would’ve been strong enough to move with the herd. “There’s never a good time for a fire, but calving time is the worst time,” Cascarini says.

The two women shoveled dirt across a line of the low-burning fire, rode their four-wheelers across, and herded the cattle toward a reservoir. As the fire approached, the women sought refuge there with the cattle. “We just stood in the water and waited for it to burn,” Torres says. “We’re lucky we had the water.”

“In retrospect, it wasn’t probably the safest idea, but it all worked out,” Cascarini says.

After the fire burned out in the area, they moved the cattle back to where the calves were, hoping to match the pairs back up, but no cow claimed the calf that had been surrounded by flames. Torres says it was sniffed by one cow that had a small calf with it, so their best guess is that the calf, which only weighed 40 to 50 pounds, was one of a set of twins.

The fire ended up burning 80% of the ranch, but thankfully the home and most important outbuildings were spared. The landowner has other ground, so Cascarini says the cattle will be parceled out and brought back in the spring. Other area ranchers aren’t so lucky, and are being forced to sell their cattle since their grazing ground burned and it would be too expensive to feed hay.

Cascarini says they did lose some cattle in the fire, but the calf, named Charlene (since she was charred), is healthy and enjoying the life of a bottle calf. “She has a few other bottle calf buddies, and since she’s so small, Jack likes to feed her,” Cascarini says. “When she came in, we treated her for burns, gave her antibiotics, and gave her a super fluffy bed because she was sore and tender. She took right to the bottle and has no issues. She drank colostrum and electrolytes and started chowing down on alfalfa. She’s a rock star.”

After the fire, Cascarini sent photos of the calf to the ranch owner, Jack Sparrowk. “The owner gifted her to us, so she is going to stay with us and live a very long life,” she says.

“The stress and exhaustion of those few days was overwhelming,” Cascarini says. “Finding this calf gave us the feeling that it was worth it. We were truly moved to tears. I was so happy to find her alive because there were others that we didn’t find alive.”

“It was truly amazing,” Torres says. “With everything going on in the world right now, we all needed a miracle like this.” 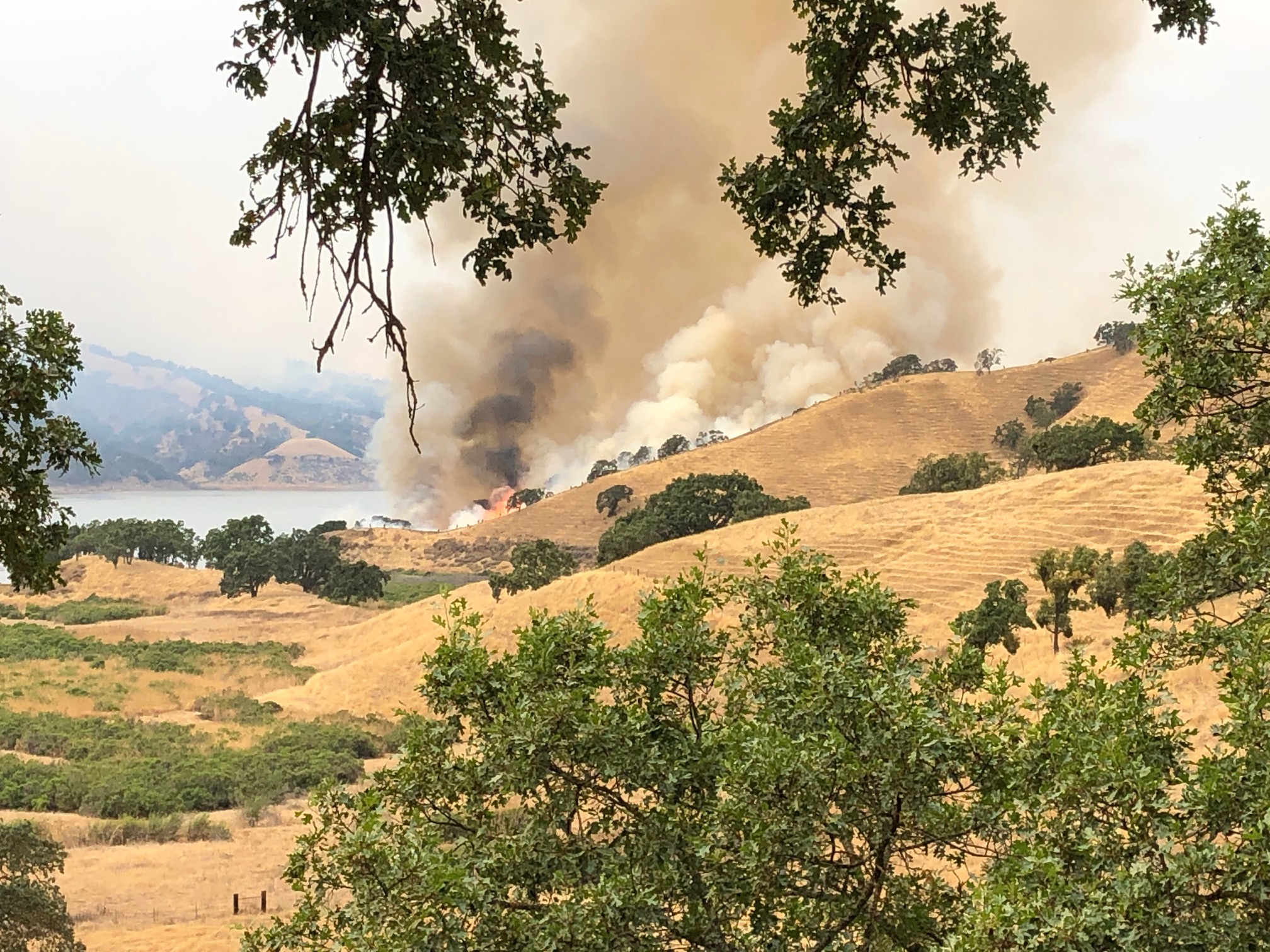 This view of the ranch shows the reservoir in the background as the fire approached the water. 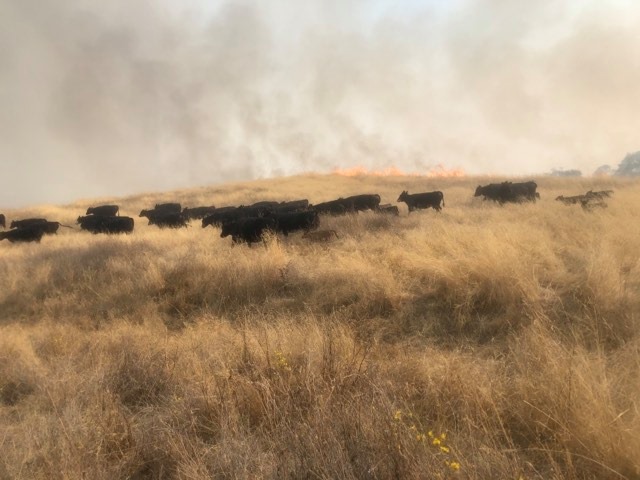 The cow-calf pairs were moved into the water to avoid the flames. 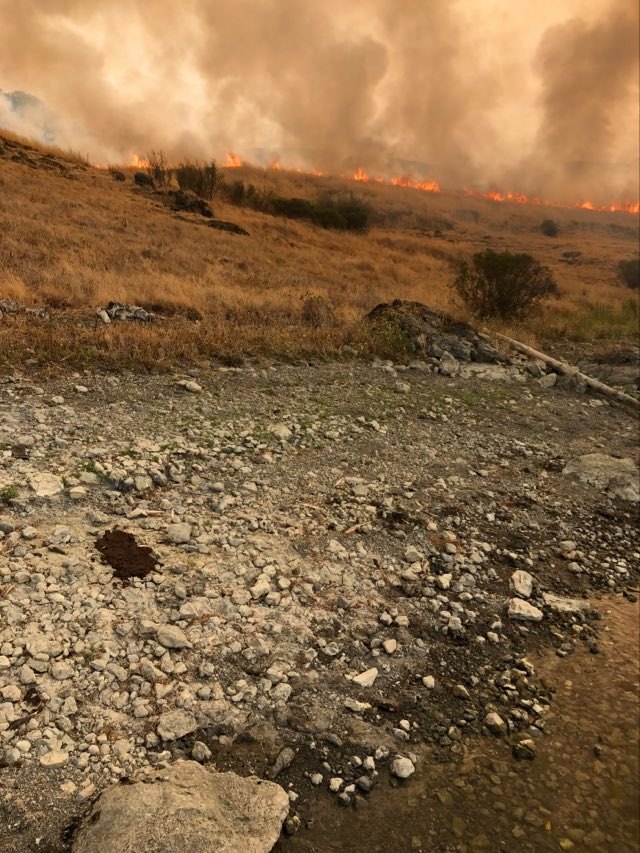 This is Samantha and Kathy’s view from the water as the flames drew nearer to them. 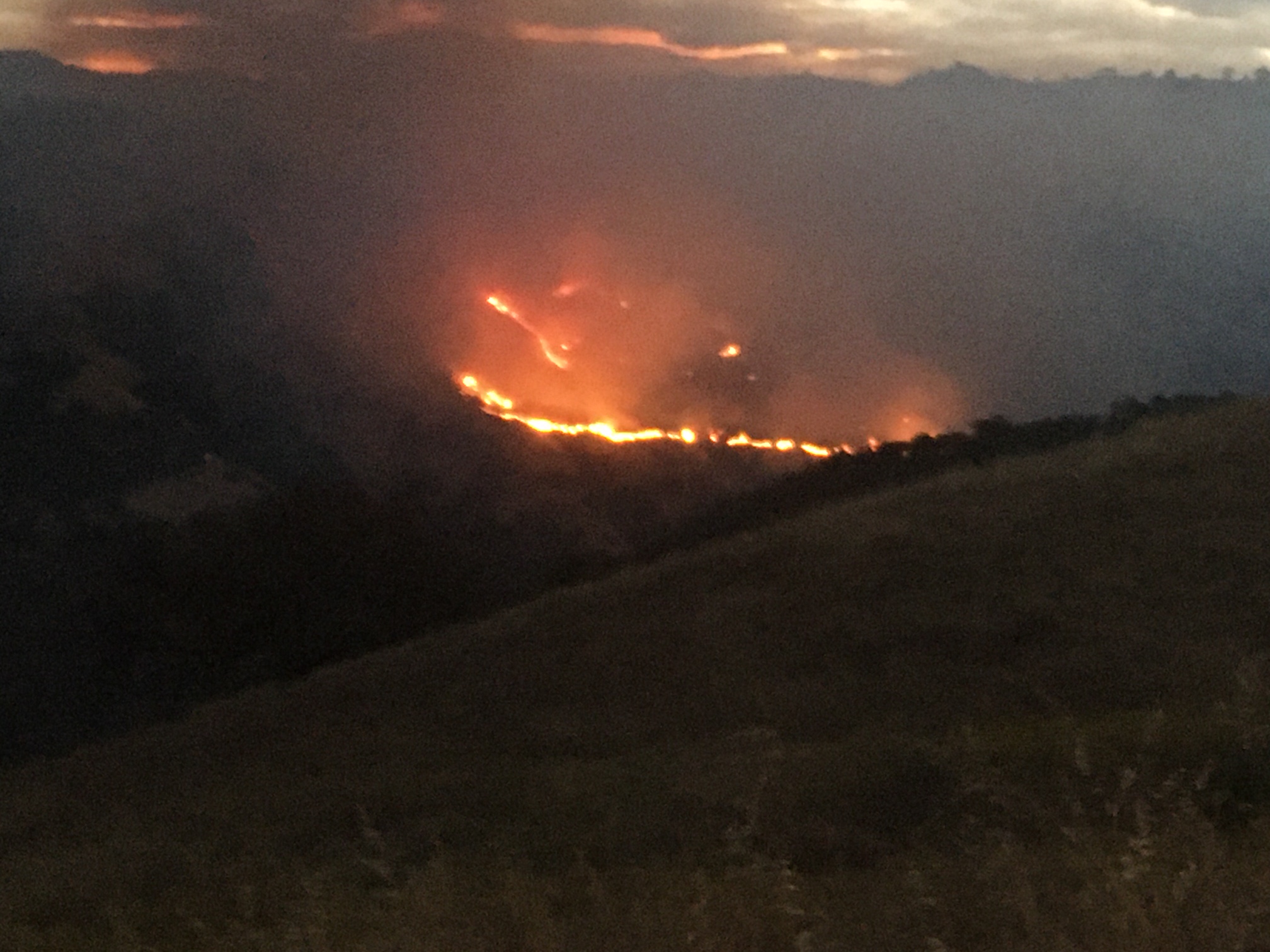 The nighttime view shows how the fire moved in a line. 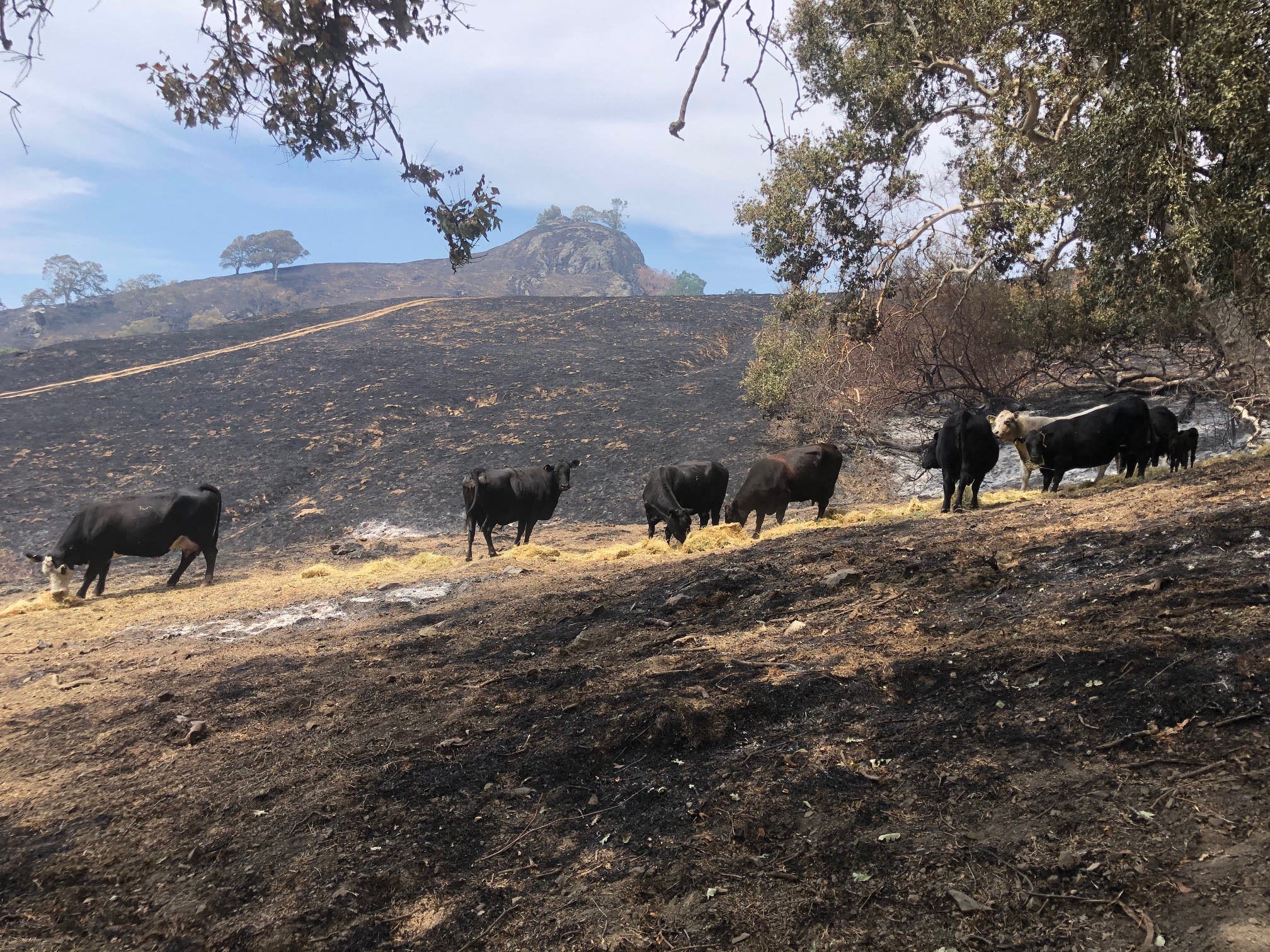 After the fire burned out, there wasn’t much left for the cattle to graze. 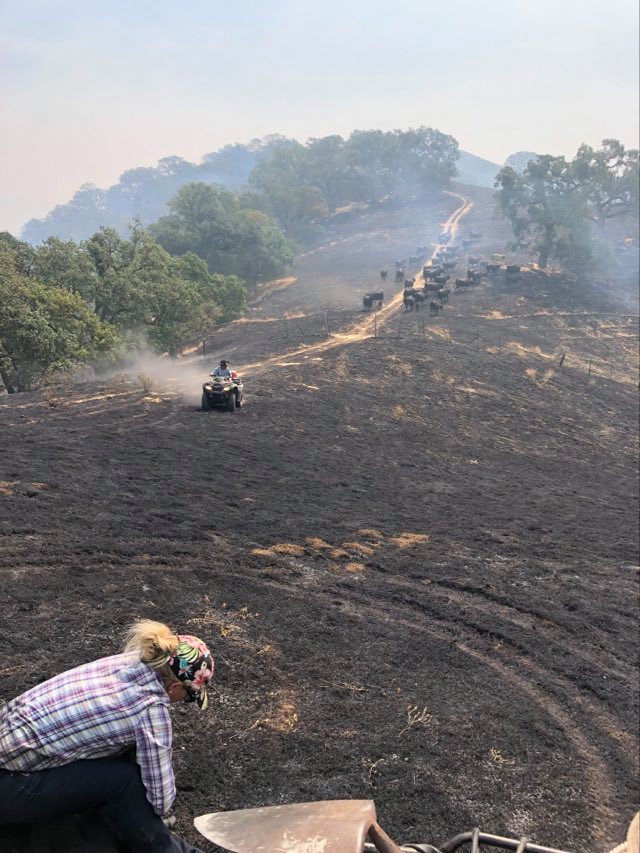 After the fire burned out, the cattle were moved to undamaged pasture. 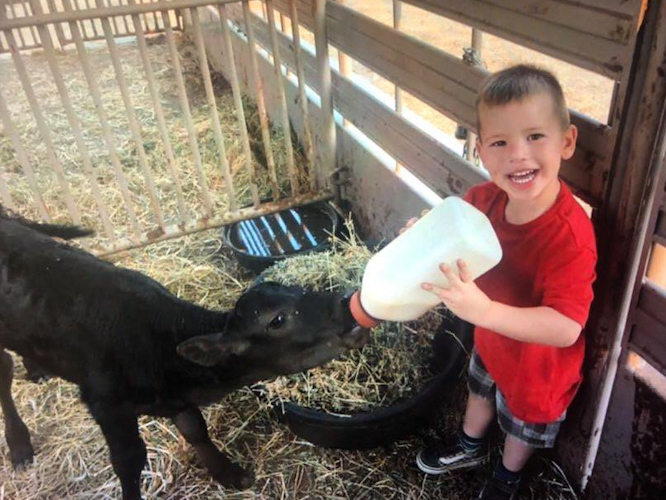 Charlene is enjoying the life of a bottle calf and getting plenty of love from Jack.

Read more about
Cattle or Women in Agriculture