2022 could be profitable despite skyrocketing input costs

Like every year, profitability will be determined by commodity prices.
By
Lisa Foust Prater

Input costs for grain farms are going to go up considerably in 2022. That’s the major take-away from a new report from the University of Illinois farmdoc Project. Agricultural economics professor Gary Schnitkey discusses the findings in a new video report, Managing 2022 Input Uncertainties.

When it comes to those inputs levels, Schnitkey says, “That is just reality and it’s going to raise our break-even levels.” Still, he says, “Right now, if we’re looking at prices for fall delivery, it could be a profitable year.”

There's no way around it: fertilizer costs are going to be a major issue in 2022.

For the first two weeks in January, anhydrous ammonia averaged $1,486 per ton, up from $700 to $800 last fall, according to the Illinois Production Cost Report. “Obviously that’s a very high price, but there is a bit of good news there,” Schnitkey says. This was the first two-week period in six months that didn't see a price increase, so that may reflect some stability. 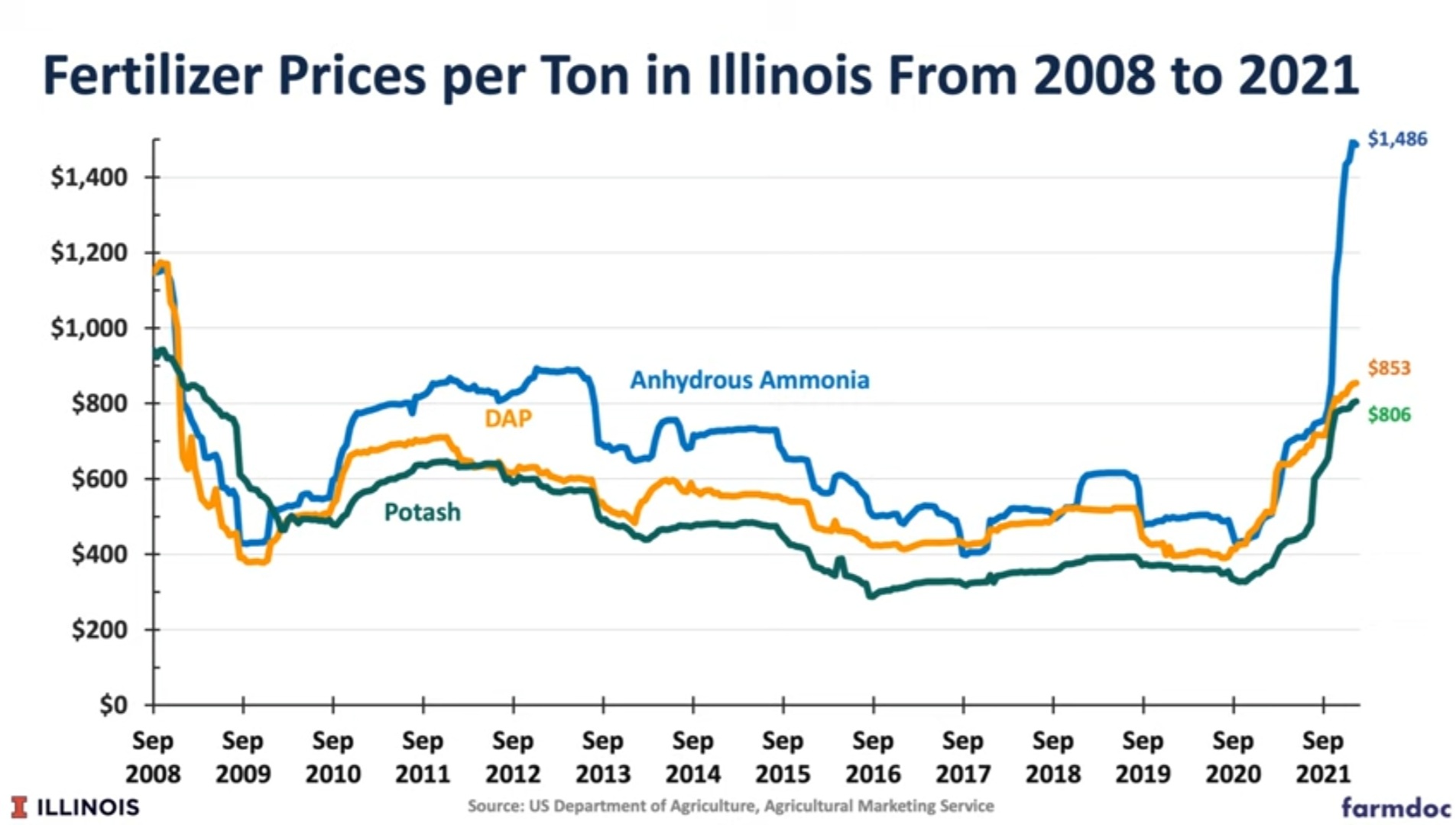 "Nitrogen prices have increased tremendously from two years ago," Schnitkey says. In October 2020, prices in Illinois were $450 per ton and it's more than $1,400.

Other fertilizer prices have gone up as well. DAP (diammonium phosphate) is now up to $853 and potash $806, both dramatic increases from a year ago.

There is a positive correlation between anhydrous and natural gas prices, he says, but the price of corn plays a larger role in the price of anhydrous. In November 2021, the actual price of ammonia was $400 above what had been predicted, after being very close for years prior. “You can speculate about why those prices have gone up so much and varied from our predicted price,” Schnitkey says. Hurricane Ida is partially to blame, after hitting New Orleans and the lower Mississippi area, shutting down ammonia plants and causing shortages.

“My expectation is that we won’t see large price declines by spring. We could se some moderation in that $400 price, but not a large decrease,” Schnitkey says. “I personally don’t expect that to decline by the time we need to make our nitrogen applications in 2022.”

Another thing to consider is the very high production cost of natural gas, especially in Europe.

“Given these high prices, I believe we’re going to see fertilizer, corn, and soybean prices to be very much related to one another until planting occurs," Schnitkey says "If we continue to see high fertilizer prices, we’ll see the margin between corn and soybeans being wide enough to make corn a profitable or competitive alternative to soybeans and other crops.” That relationship will likely go away as soon as planting is complete, he says, then weather and other conditions will determine price relationships.

When it comes to corn, he says, “If we’re going to buy some expensive nitrogen, let’s price some of that corn, particularly if the levels were looking at right now -- fall bids $5.50 -- we can lock in some profitable levels."

Overall, Schnitkey says farmers should be considering locking in or pricing more of their 2022 crop now than they usually would, but not all of it. "That’s not a projection that we’re going to have lower prices come fall. If we have any sort of yield shortfall in the United States, we could see much higher corn and soybean prices than we do now," Schnitkey says. "But we could also see lower. Remember that we have much higher production costs, so locking in some of those profits that we do see currently might not be a bad thing.”

For growers that didn't get all their nitrogen applied in the fall and still have some to put on, Schnitkey says there are a couple of ways to help maintain profitability.

Schnitkey says supply issues with glyphosate and glufosinate will continue this year, due to a combination of Covid issues, China production, container issues, Hurricane Ida, and the closing of the Bayer plant.  “Covid dramatically changed our supply system and we are still working our way up to a normal, new equilibrium,” he says.

“You can expect large increases in pesticide prices,” he says. Schnitkey believes most farmers will be able to get most inputs, but will need to reevaluate pesticide programs in light of the large price increases.

One thing to consider for the future is row cultivating. “I know it’s a joke because even if you wanted, you couldn’t find the equipment now or get it ordered and get it here, but we do need to evaluate those pesticide programs,” Schnitkey says. “That’s not going to go away, as we have no new chemistry coming on board, herbicide resistance continuing to grow, and regulatory concerns possibly limiting chemicals we do have.”

Schnitkey prepared a sample budget looking at the example of central Illinois with current fall delivery prices, the $1,400 ammonia price, and increases in pesticide costs. “When we look at corn vs. soybeans, we’re still seeing a positive return to corn,” he says. “Right now, to get those corn acres, we need to see those higher prices.”

Looking at operator and land returns for corn and soybeans, in central Illinois high-productivity land, between 2013 and 2020, soybeans were generally more profitable than corn. That changed in 2021, and corn will be more profitable in 2022 as well, although less so than in 2021.

Increased input costs means farmers are looking at much higher break-even levels for corn and soybeans in 2022. Schnitkey says the total non-land costs per acre averaged $631 in 2021, but are projected to be $755 for 2022. Cash rent increased from $284 to an estimated average of $309, so the total cost per acre to plant a crop on cash rent farmland in central Illinois is $1,064, up from $915 last year. “You can find rents that are over $400, so we’re looking at quite a range of rents,” he says.

Given those high costs, Schnitkey projects the breakeven price is $4.73 for corn. “That’s very high compared to total costs in all years except going back to 2012, but that was due to low yields due to the drought,” he says. When crop insurance payments are factored into the 2012 figures, he says, “$4.73 is the highest we’ve seen since 2000 and it will be the highest on record.”

The story is similar for soybeans. In 2022, non-land costs are estimated to be $476 per acre, up from $377 last year. Factoring in the cash rent average, the cost to plant soybeans will average $785 per acre, resulting in a break-even price of $11.06. “That’s much higher than it has been in the past,” Schnitkey says.

“Those are excellent prices but we’re coming down with our income projection because of those much higher non-land costs," he says.

If we go back to the average between 2014 and 2020 of $4 for corn and $10 for soybeans, Schnitkey says, “We go well below zero, minus $65,000. That’s what we’re looking at, so we need the higher prices, at least from the historical perspective, to have positive income.”

What can be done?

Schnitkey says one strategy for combatting reduced income is hedging more grain. “Not saying those prices are going to come down, but even if they do come down a bit, we are pretty quickly at break-even levels,” he says.

He also suggests continuing to buy-up crop insurance. “Most farmers are buying RP at 75, 80, and 85% levels. Think about staying at those levels and maybe buying up from there on the ECO, SCO, and other private product insurances," he says. "Again, get a higher guarantee in there. Staying at least high on those RP products will provide a pretty good floor for coverage.”

Finally, he reiterates the recommendation of lowering nitrogen rates and relying more on post-applications.

To summarize, Schnitkey says, “We’re looking at much higher costs, but given where our prices are at, we could still see a profitable 2022. Moving forward, these costs are likely to remain at higher levels and we will see what that will mean in 2023 and how long commodity levels stay at the levels they are.”

Read more about
Corn or Soybeans

How to manage acres following prevented planting
Article
Siblings honor Dad with whiskey made from his corn
Article
Devise a plan to monitor and manage corn troubles
Article
‘Feast or famine’ yields will depend on rainfall
Article
END_OF_DOCUMENT_TOKEN_TO_BE_REPLACED
For related content and insights from industry experts, sign up for Successful Farming newsletters. Sign up
Loading...

Cow ankle straps will hold or secure in place my rolled up ropes and drop cords. They are easy to put on, and, unlike cable ties, they’re... read more