Pablo Picasso once said, “The purpose of art is washing the dust of daily life off of our souls.” When the art is situated alongside a dusty gravel road, it certainly provides a bright spot in the daily lives of those who are lucky enough to witness it.

Terry and Billie Spradlin bought a former dairy farm near Ray, Ohio, 14 years ago, and immediately fell in love with the century-old barn on the property. It was in rough shape, but rather than tear it down, they decided to fix it. “We knew we had to bring the barn back to life,” Billie says.

Once the boards were replaced and the structure was stabilized, they decided to take their barn to the next level by having it turned into a work of art. After seeing a mural painted by artist Pamela Kellough of Chillicothe, Ohio, the Spradlins commissioned her to transform one side of their beloved barn into a mural with an American theme.

Kellough met with the Spradlins, discussed ideas, and got to work. Luckily, the 8×64-foot barn wall was all made of newly replaced boards, so she had a good surface to start with. While this was a big project, it wasn’t quite as big as her largest, which measured 15×120 feet. Work on the barn took place over five days in July 2020.

Anyone who sees Kellough’s murals would assume she has had formal art training, but that is not the case. “I did not have the privilege of an education in art as no high school art classes were offered,” she says. “My last art class was in sixth grade by a really grumpy teacher.”

Her creativity could not be stifled, however, and she found outlets in crafting, painting, sewing, and making furniture. “I have a creative monster living inside of me that needs to be fed daily,” she says.

She got her start painting murals when a friend who knew she did some painting for crafts asked her to paint her nursery walls. “I was reluctant as I had no training,” Kellough says, “but she insisted, I completed the room of baby angels, and it looked wonderful.”

This project gave Kellough the confidence to approach builders from the Parade of Homes in Columbus, Ohio. “I participated several years and it catapulted me to another level doing work mostly in the Columbus area,” she says. More and more businesses began hiring her, and although she still does some murals in private homes, most of her work is for commercial clients today.

Since most of her work is done in public spaces, she gets a lot of questions from passersby. “I will have children ask me, ‘How did you get so good?’ My response is to practice daily, just like you would on a piano,” Kellough says. “Young women will say, ‘I wish I could do what you do,’ and I respond by saying that at their age I couldn’t do what I do. Everything takes time and application of your craft.”

Before her work on the Spradlins’ barn, Kellough kept busy painting murals across Ohio, posting photos of projects throughout the process on her Facebook page, Pamela Kellough Murals. When a photo of the completed barn mural went viral with around 100,000 shares, she began receiving requests for project sketches and bids from coast to coast.

“I do admit when my Facebook post was so well received it made me very happy,” Kellough says. “The comments were all so complimentary and kind. Most artists have some insecurity about their work, and when it is well received it is such an affirmation. It reinforces that we are on the right career path.”

Most murals are painted in public spaces, or at least on private property that is visible to the rest of the world. The Spradlins’ barn isn’t on a busy highway. It can’t be seen from the interstate. It can only be viewed when traveling from one direction on their rural gravel road.

So why did they invest in such a large piece of art when so few people will see it in person? “We didn’t do this for the world. This is just for us,” Billie says. “We love our barn, we love America, and seeing this beautiful mural every day is a reminder of how lucky we are to live where we do.” 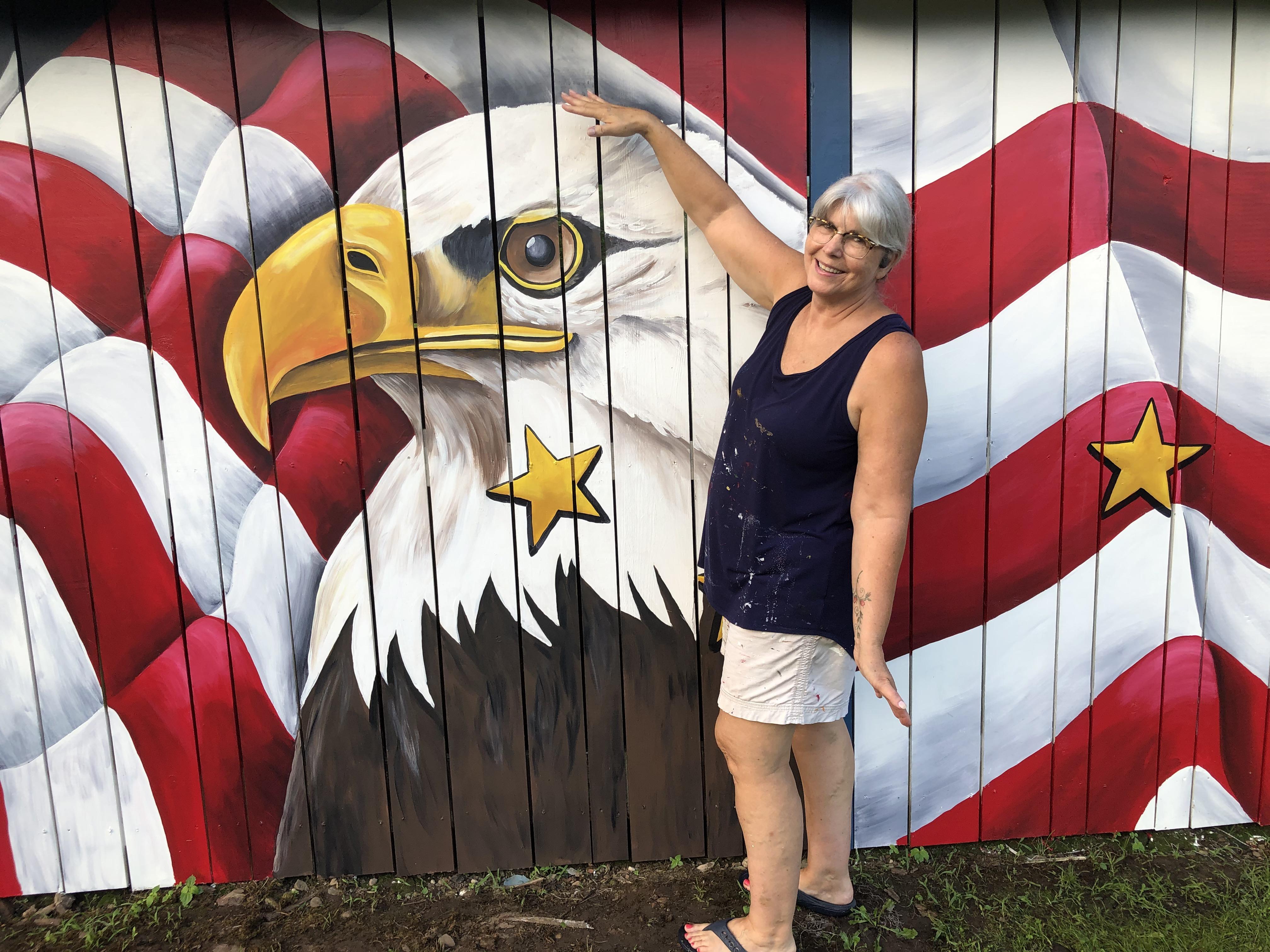