Part two of our series of excerpts from the book "Food Bullying" examines bullying motivators.
By
Successful Farming Staff

Jennifer Garner’s favorite pet chicken tried to kill her new chicks. The actress keeps hens at her home, and when she added to her flock last year, there were some problems. After all, chickens will be chickens. Captain Hook apparently didn’t like her territory invaded and turned on the newcomers.

Garner told talk show host Ellen DeGeneres, “They are such nice pets until they get mad at each other. We had six chickens and we got seven new ones. We tried to introduce them, and Captain Hook, one of our older chickens, was not nice. She started trying to attack and kill the new chickens, specifically Hennifer, so we got a small coop to protect the new ones.” Garner even admitted to having a pep talk with Captain Hook, but it hasn’t changed the hen’s ways; she still wants to attack.

This doesn’t come as a surprise to Successful Farming magazine readers. Farm animals follow a pecking order, even if they hang out in the backyard of a celebrity’s home. Chickens are carnivores and cannibals, not to mention scavengers. They will do whatever it takes to survive.

Like chickens, humans are hardwired for survival. Yet, most messaging we receive around food has little to do with surviving – or even safety. But it is important to remember that nourishment is one of our most basic needs.

A formerly homeless woman in Massachusetts recently gave me a poignant reminder about how a person’s very survival can be threatened on the playground of food bullying. “Real people are being harmed as the cost of food is manipulated by special interest groups. Thank you for your work and please thank farmers for theirs (from a mom who knows what hunger looks and feels like).”

She gave birth to her son when she was homeless. Can you imagine trying to feed a newborn in such an environment? Few of us understand real hunger, but, sadly enough, one in eight people in the U.S. and Canada lives without food security. It’s a reminder that the argument around food most often comes from a privileged position of food availability.

People who live in conditions of chronic hunger and malnutrition worry more about their next meal than the latest label claim or what brand of food their friends recommend. Let’s all remember that.

Is trust misplaced or abused?

Sometimes our trust is misinformed, such as when Jennifer Garner trusted that Captain Hook would warmly welcome Hennifer to the backyard chicken flock. Other times, trust is abused by the players on the food bullying playground, similar to Captain Hook abusing the new chickens in her role as the queen hen. We typically trust those with implied power of position, platform, or product.

Before we examine needs, let’s remember that we all purchase food, and we make those buying decisions on information we trust. It can be hard.

For example, trust in a label that claims all natural is misplaced because there is no standardization or scientific oversight to prove this claim. It is BS. All-natural corn chips are likely equally as healthy as all-natural hot dogs.

But if your Facebook friend convinces you that all-natural corn chips are a diet must-have and that kiddos at your backyard barbecue deserve all-natural hot dogs, are you bullied through implied power of platform?

Your trust is abused when a manufacturer attempts to label a product to stand out from similar products, all in the pursuit of money or power. A food company’s marketing team decides that labeling its meat antibioticfree will differentiate the product in the very competitive meat case, resulting in more sales for the antibiotic-free meat. The label infers superiority when, in fact, each brand of meat is tested equally for antibiotic residues.

On a quick trip to the grocery store, it is easy to be bullied by the implied power of product and have your trust abused by label claims. 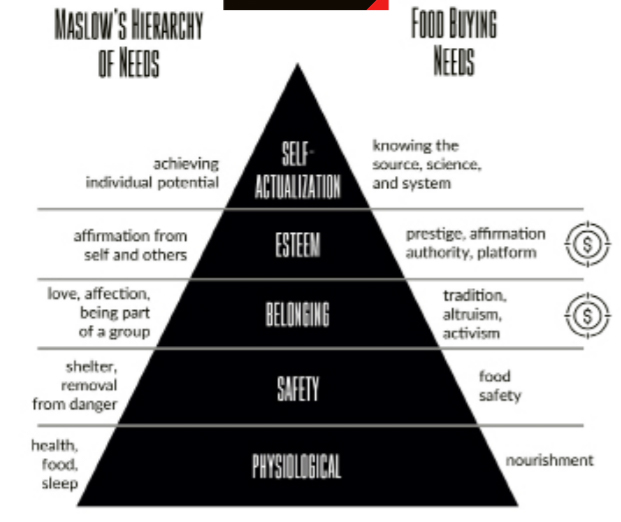 Let’s take a look at the chain of command for our basic human needs so we can determine where trust in food claims can be placed. These needs provide motivation for doing something, especially those reasons that are hidden or not obvious.

Maslow’s hierarchy of needs is arguably the best-known and most widely accepted theory of human motivation. Maslow’s hierarchy demonstrates there are five interdependent levels of basic human needs (motivators) that must be satisfied in sequence. The hierarchy shows physiological needs must be met first, followed by safety needs, then belonging and esteem needs, and finally need for self-actualization, which is key in reaching our highest potential.

According to Maslow, all human actions can be largely explained based on these five levels of needs. In my own research and work experience, I have increasingly found what I believe are close parallels between Maslow’s hierarchy and what motivates both food sellers and food buyers.

By better understanding the motivation behind selling and buying behavior, we can also better grasp food bullying strategies, recognize when they are being used, and develop our own plans for resisting the mind games.

Bullying most often preys on esteem and belonging needs, once the physiological and safety needs are met. I have also found that those selling food move from influence to bullying by focusing on our belonging and esteem motivations.

By placing food buying needs on Maslow’s hierarchy, we have a tool to understand and evaluate how motivation is used and abused across the food playground. Looking at food-buying needs on Maslow’s hierarchy allows us to start with the fundamentals. The influence at the physiological and safety level is, what is nutritious and safe? Unfortunately, these two basic levels are often overlooked in developed countries; nutritious and safe food is largely assumed, even expected.

Moving up the hierarchy, influence can change to bullying in order to meet a buyer’s belonging and esteem needs, as shown in the following examples.

As demonstrated on Food Bullying’s model of food-buying needs, the middle two levels are most frequently targeted for bullying, very often driven by those seeking profit. Food is big business; grocery stores, restaurants, drug stores, convenience stores, and mass merchandisers sold $5.75 trillion worth of food in 2017. That’s more than twice the size of India’s economy.

Most Americans seemingly like visiting the grocery store, averaging about 1.6 trips per week in 2018. Even though online grocery shopping has existed for years, the vast majority of consumers still prefer to buy groceries in stores. Walmart alone sold more than $318 billion in 2018, operating 4,761 stores nationwide, excluding Sam’s Club. There are now over 30,000 dollar stores, more than the six largest U.S. retailers combined (Walmart, Kroger, Costco, Home Depot, CVS, and Walgreens).

That’s a lot of opportunity for bull speak! Competition for food is intense, as is the need to differentiate products or brands. One manufacturer, talking off the record, noted, “We could spend $100 million to educate people to accept our product, or give them what they want on the label and we make $20 million.” As this example shows, it is common for food bullies to prey on people’s fears to make money.

The many ways marketers appeal to your needs are overwhelming and complicated because they bring their own needs into it. Use the hierarchy of food-buying needs to ask yourself, “Is this food nutritious and safe?” Share the hierarchy with those who have questions about food and farming. You’ll find it saves a lot of time, confusion, and guilt in the grocery store. It also may help you protect your right to farm as you see fit.

Michele Payn is the author of Food Bullying, a number-one best seller on Amazon. She loves cows, chocolate, and creating conversations around the plate. Learn more at CauseMatters.com. Find our Part 1 excerpt from Food Bullying at Agriculture.com/FoodBullying.

Preventative fungicide with multiple modes of action can be key to apply in late-summer.