Feeding the crew is more convenient for the cooks and more comfortable for workers in this tricked-out bus.
By
Lisa Foust Prater

Food trucks are all the rage in urban areas, specializing in everything from tacos to ice cream. When you're in the country, though, there's little chance of having a restaurant roll down the gravel road at chow time—unless you work for one of the Metzger family farms in Alberta, Canada.

The enterprise grows cereals, pulses, and oil seeds, and was started 50 years ago by Joan and the late Don Metzger. Today, son Marty helps Joan manage Donjo Farms. He and wife Kyle, who grew up on a dairy farm in Montana, run Valley Ridge Farms. Marty and Kyle's son and daughter-in-law, Scott and Rinske, run Metzger Ventures. "They are young farmers with a passion for agriculture," Kyle says. Daughter Taryn is a college student studying agriculture and is also a member of the crew.

Even before today's enterprises got their start, the family farmed in Alberta. Marty's great-great-grandfather was the first, after arriving from the Dakotas in 1914. This makes Marty a fifth-generation farmer, and Scott a sixth. 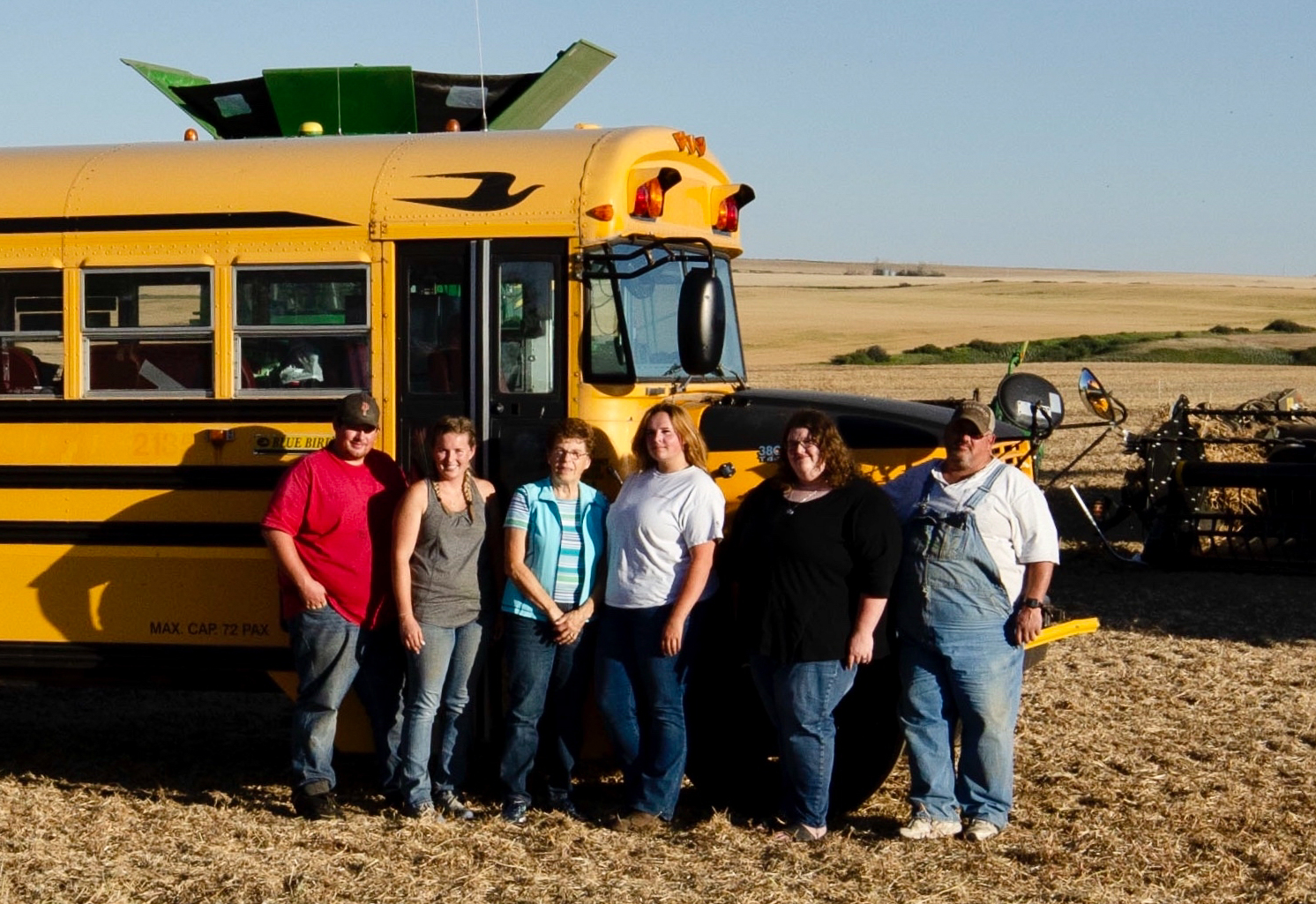 The Metzger farms crew consists of family members and two full-time employees. "When at full capacity, we employ retired farmers, friends, neighbors, and a local trucking company to help get loads to the elevator," Kyle says. "Our crew is quite varied and extraordinary."

During harvest, seeding, and other busy seasons, there are a dozen or more workers in the field. Kyle, a self-proclaimed foodie, and Joan handle the meals. In the past, they set up folding tables and chairs in the field. "This worked great most of the time," Kyle says. "Other times, Mother Nature liked to interfere with wind, a blazing sun, and later in the season, cold temperatures."

Marty had heard about another farm using a school bus to deliver meals to its crew. "I was sold on the idea instantly," Kyle says. "Over this past winter, Rinske got the ball rolling by searching for used buses online." Before long, the Metzgers were the owners of a 2005 decommissioned 72-passenger school bus. 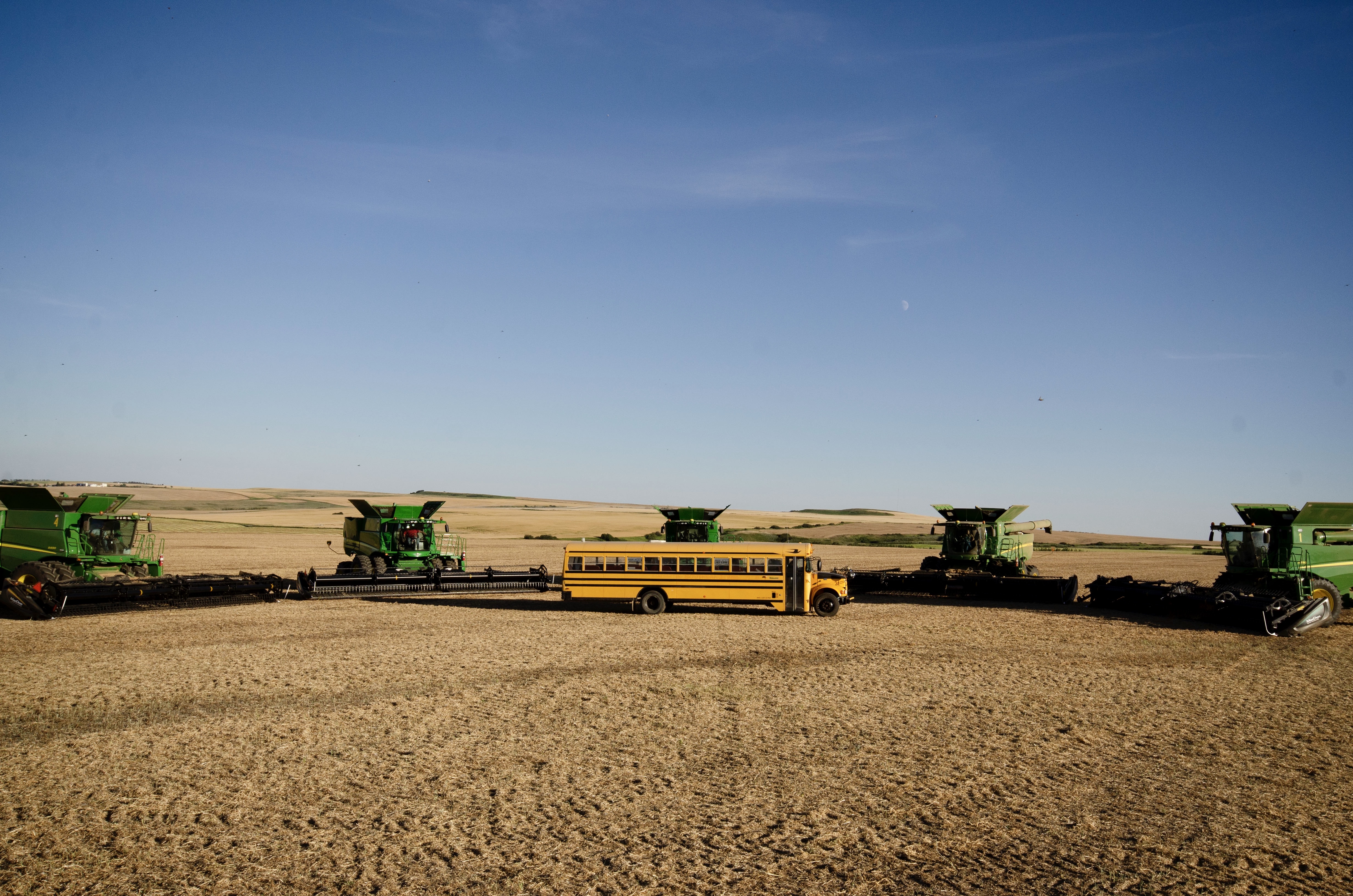 The first step in converting the bus was to reconfigure the seating. Marty and the crew lined the sides of the bus with seats, leaving room for a serving area and refrigerator behind the driver's seat.

The 8-foot metal serving table was fabricated with a lip to keep things from sliding off during transport. "It was painted John Deere green giving a little wink and nod to our combines," Kyle says. The table has plenty of room for a coffee station, plates, food and drinks, and condiments. The refrigerator and freezer hold bottled water and ice cream treats.

When it comes to powering the bus, Kyle says, "This is where Marty really won the ingenuity award." He installed an inverter and wired in a wall socket near the refrigerator. When the bus is parked at home, an extension cord is used to plug the bus into a garage outlet, and the inverter is plugged in to charge. Before leaving, Kyle unplugs the bus, turns on the inverter, and plugs the fridge in there.

"When I get to the field, I can plug the coffee maker, slow cooker, fan, and even phone chargers into the inverter," Kyle says. "Having power on the bus is an amazing perk!"

To complete the eating area, the Metzgers added several 18-inch-wide conference tables. "They have a wide base and I've only toppled over a table once when taking a turn too quickly," Kyle says.

Other features include a hand-sanitizing area outside the door, a magnetic paper towel holder on the ceiling, LED lighting, garbage and recycling bins, a tote for extra paper products, an emergency kit, and a private channel radio so Kyle can alert the crew when it's time to eat. 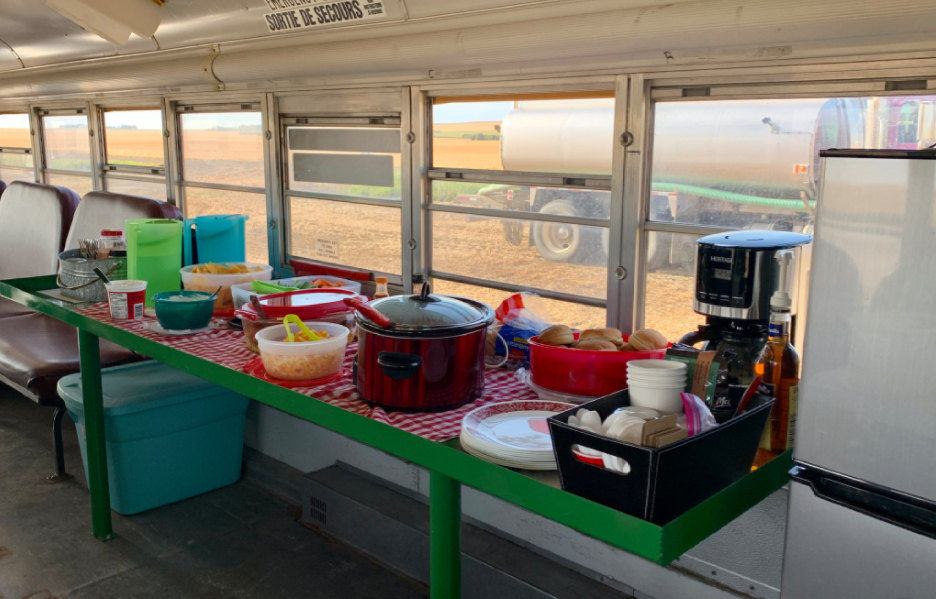 "Casseroles are king when taking meals to the crew," Kyle says. Her mother's cornbread casserole and Joan's marinated tomatoes (see recipes, below) are favorites. "Our crew works extremely hard, long hours, so we try to provide a meal to sustain them," she says. "Our menus are heavy on the meat, plus a starch, always a salad and vegetable, and a sweet to top the meal off."

Kyle says the best part of meal time is visiting with the crew. "We enjoy the bit of down time to talk about the events of the day and share any funny quips," Kyle says. "We always enjoy the time we have as a group."

Recipes From the Bus

Boil above ingredients until veggies are tender. Drain.

In a large saucepan: Melt butter. Add salt & pepper and flour. Take off heat and stir in milk. Place back on heat and stir until boiling. Add cheese and stir until melted. Add ham and cooked vegetables. Pour into 9x13 casserole greased well with cooking spray.

Stir above ingredients until smooth. Spoon this cornbread topping over filling around the edges of the 9x13 casserole dish leaving a hole in the center for venting.

Bake at 400 degrees for 35-40 min. or until cornbread topping is nicely browned and filling is bubbling. Enjoy!

Read more about
Family or All Around the Farm

I made this carrier for screws and other fasteners out of small metal coffee cans (but plastic cans would work, too). They are attached to... read more