I grew up picking up pecans that dropped from the trees outside my great-aunts’ house, but a recent trip to a pecan orchard showed me that pecan farming is a lot more involved.

My oldest two sons and I visited Taylor Pecan Company in southeast North Carolina over the weekend for pecan harvest. While the boys filled their pockets with pecans that had been shaken from the trees, equipment was busy harvesting.

The first step is to shake the tree, causing ripe pecans to fall.  A tractor backs up to the tree, gently squeezing the trunk. The shaking lasts only a few seconds but sends a shower of leaves and pecans flying. The trees in this orchard had already been shaken twice, and the farmer was making one more pass through. 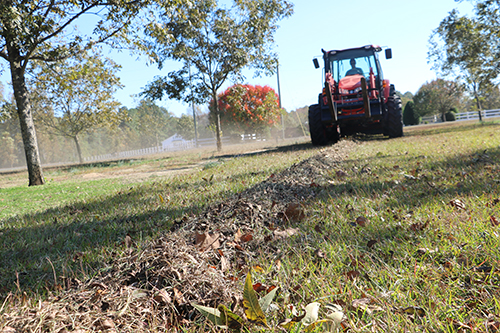 Next, a sweeper comes through to rake the leaves, branches, and pecans into a row. It reminded me of making windrows of hay.

Following that a vacuum comes through, driving over the row and spitting leaves and branches to the side, leaving pecans behind. The final step is the harvester, a machine with many fingers that pick up the pecans.

After harvest, the pecans go to the packing shed. At this point they are still in the husk, or outer shell. At this farm pecans are stored in the freezer. When it’s time to shell them, they are pulled out and run through a sheller. 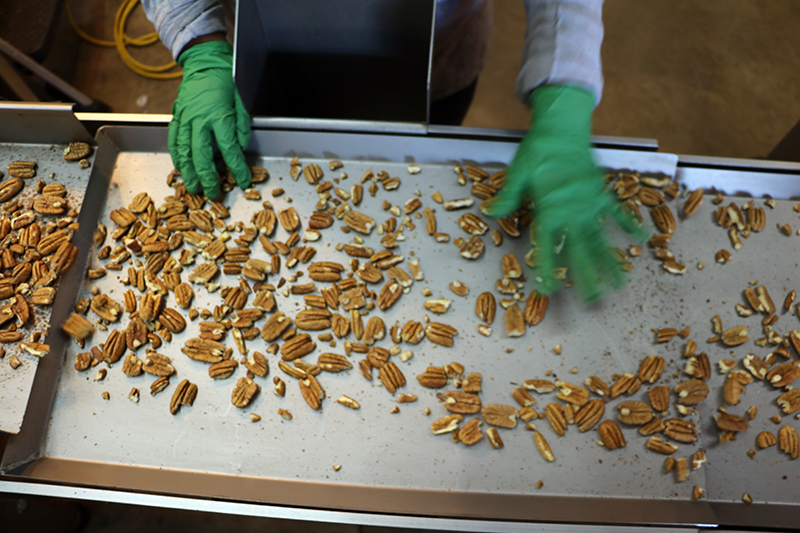 After shelling, they run down a sorting line where they are separated and packed by size.  Then it’s off to market or back into the freezer until it’s time to be sold.

Pecans are one of the only nuts native to the United States. Trees can produce for 75 years or more. I didn’t know until talking to the farmer that pecan trees alternate years of production. This year trees aren’t producing as many pecans, which means next year they will grow a good crop of pecans. This is a natural process and no amount of fertilizer will change Mother Nature’s plan.

I also learned that pecan trees are pollinated by air, not bees or other insects. Farmers plant orchards with three or more varieties so the trees can cross-pollinate. Pecan orchards are a long-term investment; it can take 10 years after planting for a tree to produce the first commercial crop.

We’ll enjoy our pecans more this year knowing how much work farmers put into growing this nutritious nut.

Read more about
Women in Agriculture or Crops

Attend a Women in Ag conference in 2023
Article
How are you really?
Article
Picking the perfect Christmas tree
Article
Christmas with cows
Article
END_OF_DOCUMENT_TOKEN_TO_BE_REPLACED
For related content and insights from industry experts, sign up for Successful Farming newsletters. Sign up
Loading...