As I drove across the middle of the country during harvest, I caught a glimpse of a rare sight. A farmer’s entirely green fleet was operating with one lone red tractor pulling a massive grain cart. You do not see this mixing of colors very often. This Case IH Steiger Quadtrac was certainly needed to tow the behemoth grain cart behind it. But why adopt Case IH over John Deere if your operations is so obviously slanted green?

Later I checked on our price analysis site, ironcomps.com, to find the difference between the quad track values of these two brands. Turns out there is quite a difference in price.

Case IH innovated this market with their Quadtrac Steiger tractors beginning in 1996 and held that competitive edge with a patent that just ran out about five years ago When looking at the Insights data, I could see the early preference for Case IH. For all track tractors built between 2010 to 2015 the average Case IH track value was higher than average.

That all changed in when John Deere introduced their RX tractors. These quad track models exact a much higher price right out of the factory door. Because of this higher starting price, John Deere has owned the title for higher-than-average price for track tractors produced between 2015 to 2017.

While there is an initial price difference between red and green, what is most interesting is the different rates that these tractors retain value. To compare similar sets of data, I filtered and selected my Insights data to include only four track models of both Case IH and Deere with less than 2,000 hours. This helps put Case IH on a price parity. This is due to the fact that Deere tracked 4WDs have not been in production as long as Case IH tractors. Thus Deere tractors haven’t accumulated as many hours.

In this analysis, Deere's tractors have a higher initial price but that value decreases at about the rate of $125 for every hour those tractors run. Compare that with Case IH, whose tractors decrease in value at only $50 per hour. There are some explanations for this discrepancy. Some Case Quadtracs are “scraper specials,” and don’t have three-point hitches, PTO or as bells and whistles in the cab. Because these scraper models are more basic, there is less value to depreciate early with usage.

Even if you are a green fan, you must give credit where credit is due. A good portion of this red retention of value likely comes from years of Case IH continually their tracked Steiger line since it was introduced n the nineties. 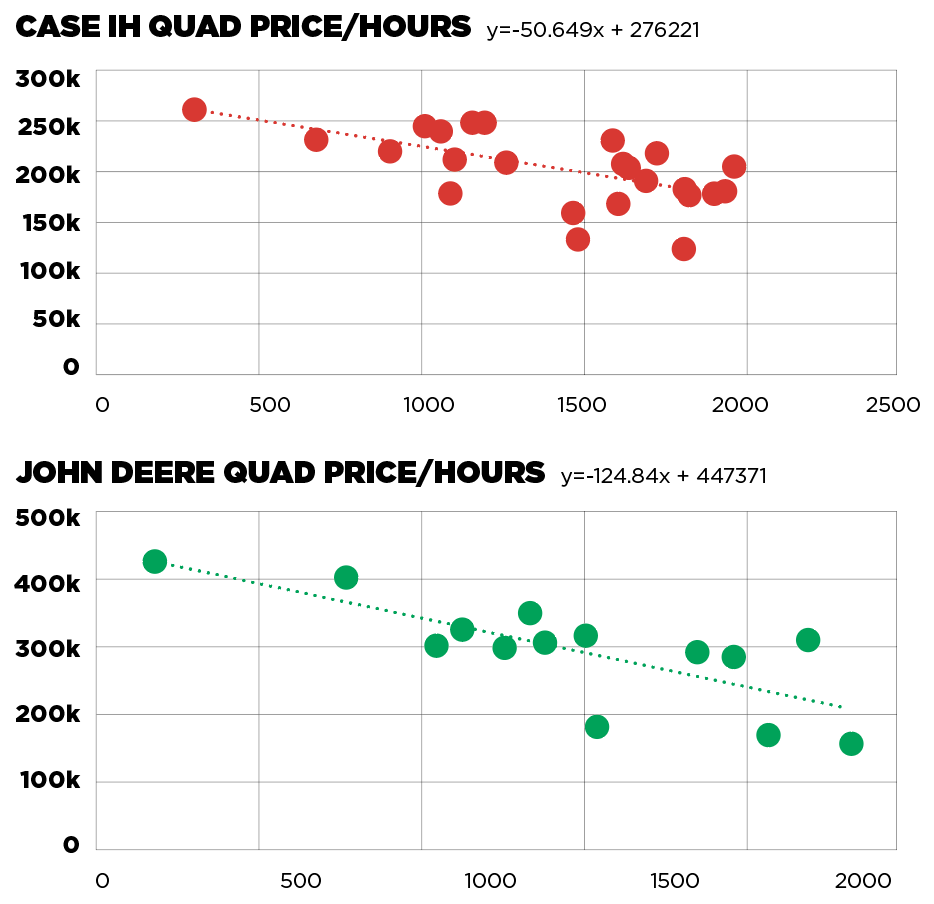 What to look for when buying a backhoe loader
Article
New tool lets you predict sale prices of equipment at auction
Article
Allis-Chalmers 190XT sells at auction
Video
Now is prime time to buy a combine
Article
END_OF_DOCUMENT_TOKEN_TO_BE_REPLACED
For related content and insights from industry experts, sign up for Successful Farming newsletters. Sign up
Loading...